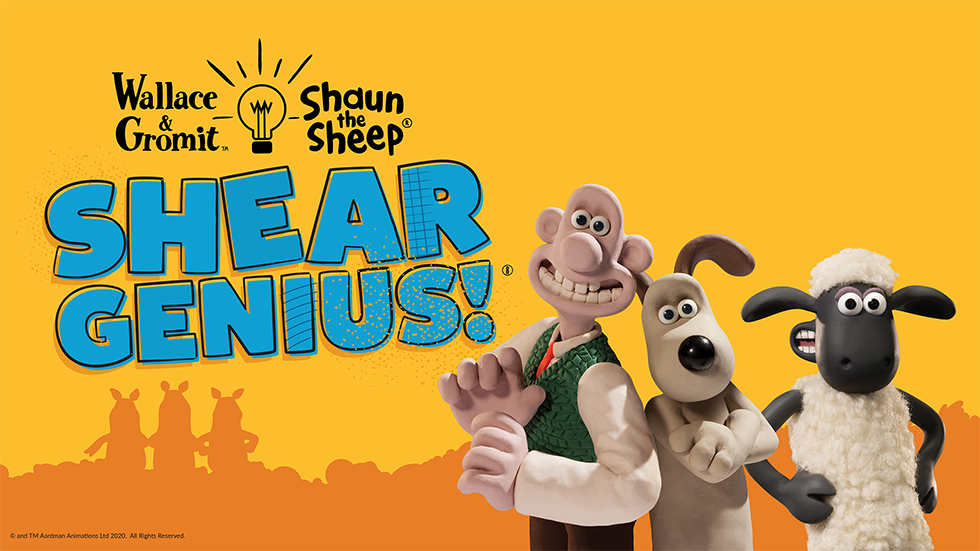 Opens May 28 at Minnesota Children’s Museum

In this hands-on exhibit, visitors will step into the environments of Wallace & Gromit and Shaun the Sheep – 62 West Wallaby Street and Mossy Bottom Farm – to explore the contraptions, antics and escapades of Wallace, Gromit, Shaun and other familiar Aardman characters through dramatic play and interactive opportunities.

Designed for children ages 3 through 9, Wallace & Gromit™ and Shaun the Sheep™: Shear Genius! builds on problem-solving themes found throughout both shows. Components and activities throughout the exhibit encourage children to playfully solve and talk about problems in fun, engaging ways.

Exhibit components and activities encourage children to playfully solve STEM-based and social-emotional problems in fun and engaging ways – from completing a circuit and to deciphering expressions, to fixing a machine and using the power of collaboration to help a farmyard friend.

Wallace & Gromit™ and Shaun the Sheep™: Shear Genius! will run through Aug. 28 in the Special Exhibits Gallery on the fourth floor of Minnesota Children’s Museum. Admission to the exhibit is included in general admission. Museum admission is $16 per person for ages 1 to 101. Museum members get in free. Tickets are available at https://mcm.org/tickets.

Hitting the Road
After Wallace & Gromit™ and Shaun the Sheep™: Shear Genius! closes at Minnesota Children’s Museum on Aug. 28, it will be split into two new travelling exhibits – Shaun the Sheep: Flock This Way! and Wallace & Gromit: Get Cracking! These two exhibits will be made available to museums and other venues across the country, adding to Minnesota Children’s Museum’s existing roster of acclaimed traveling exhibits.

Organizations interested in booking Shaun the Sheep: Flock This Way! or Wallace & Gromit: Get Cracking! should visit https://rentexhibits.mcm.org for more information.

About Minnesota Children’s Museum
Minnesota Children’s Museum is dedicated to sparking children’s learning through play. Our vision: “Kids play more. Adults do, too. All families thrive in a happier, healthier and more innovative community through the radiant power of play.” The museum, which celebrated its 40th anniversary in 2021, has provided playful learning experiences to more than 12 million visitors. The museum’s downtown St. Paul location features three floors of fun and 11 interactive exhibits. As the nation’s leading developer of traveling children’s museum exhibits, the museum is a trailblazer in creating immersive learning environments, reaching more than 10 million children and adults in the United States, Canada and Mexico. Visit www.mcm.org for more information.

About Aardman
Aardman, based in Bristol (UK) and co-founded in 1976 by Peter Lord and David Sproxton, is an independent and multi-Academy Award® and BAFTA® award winning studio. It produces feature films, series, advertising, games and interactive entertainment – current animated productions include: 2021 holiday specials Robin Robin and Shaun the Sheep: The Flight Before Christmas, CGI series Lloyd of the Flies, a new stop motion series for pre-schoolers The Very Small Creatures, feature length sequel Chicken Run: Dawn of the Nugget and a brand new Wallace & Gromit film for 2024.

Its productions are global in appeal, novel, entertaining, brilliantly characterized and full of charm reflecting the unique talent, energy and personal commitment of the Aardman team. The studio’s work – which includes the creation of much-loved characters including Wallace & Gromit, Shaun the Sheep, Timmy Time and Morph – is often imitated, and yet the company continues to lead the field producing a rare brand of visually stunning content for cinema, broadcasters, digital platforms and live experiences around the world. Recent celebrated projects include the ‘visually astonishing’ (Guardian), BAFTA® nominated console game, 11-11: Memories Retold, the four-times Gold Cannes Lions-winning StorySign app, AR experience Wallace & Gromit: The Big Fix up – and innovative attractions for both the domestic and international market, including a 4D theatre attraction at Efteling in the Netherlands.

The studio runs the Aardman Academy which has a commitment to nurturing talent by delivering excellence in film and animation training and mentoring. The Aardman Academy offers a variety of courses from intensive one-day workshops teaching production skills and storyboarding, to comprehensive twelve-week courses for professionals in craft based subjects from model making to animation.

In November 2018 it became an employee-owned organization, to ensure Aardman remains independent and to secure the creative legacy and culture of the company for many decades to come. www.aardman.com