Children Often Too Busy to Play, Survey of Parents Finds

Less time playing means fewer opportunities for children to develop the important skills they need to thrive now and throughout their lives.

“The research is absolutely clear: Rich and deep learning happens through play,” said Dr. Megan Gunnar, director of the Institute of Child Development at the University of Minnesota and chair of the Museum’s Research Advisory Council. “If you want to help your children to thrive in a constantly changing world where they will need to invent and reinvent themselves in order to succeed, make more time for play.”

Minnesota Children’s Museum published the survey results in a report titled “Play Under Pressure.” The Museum commissioned the survey to gain insight about parents’ attitudes regarding play during an era in which discussions about screen time, school readiness, over-scheduled kids and parenting styles are commonplace.

More than 1,000 parents and other caregivers completed the survey, which was developed in partnership with the Museum’s Research Advisory Council and conducted by public opinion research firm InsightDynamo.

Some key insights include:

But families face a variety of pressures…

Which means play time often gets crowded out…

The survey findings align with national research showing that play time is declining. On average, the time children spend playing has fallen eight hours per week since the 1980s, according to research cited in the “The Power of Play: A Research Summary on Play and Learning,” written for Minnesota Children’s Museum.

The Museum is using the survey findings to further develop initiatives to raise awareness about the benefits of play throughout life. In fall 2015, the Museum launched #PlayMoreMN, a movement to urge parents and our entire community to recognize and celebrate the value of play – for both children and adults.

Minnesota Children’s Museum envisions a future in which kids and adults play more. The Museum sees our community thriving as a happier, healthier and more innovative place through the radiant power of play.

“Play is sometimes viewed as frivolous or something to be done in moderation,” said Nichole Polifka, the director of learning and impact at Minnesota Children’s Museum. “But play is a big deal. Play is a necessity. The learning that happens through play sticks with children.”

Parents and other caregivers who want to support the learning that happens through play can:

Minnesota Children’s Museum is committed to sparking children’s learning through play. The Museum views all play as beneficial, but considers open-ended, child-directed play – or “powerful play” – the most impactful. The Museum believes “powerful play” pairs play and learning as lifelong partners. It celebrates children as their own agents of learning. 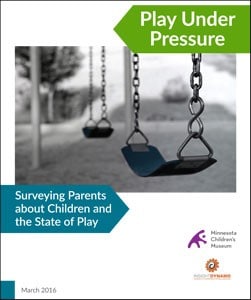 About Minnesota Children’s Museum
Minnesota Children’s Museum is dedicated to sparking children’s learning through play. Our vision: “Kids play more. Adults do, too. We thrive as a happier, healthier and more innovative community through the radiant power of play.” The Museum, which first opened in 1981 and moved to downtown St. Paul in 1995, serves more than 460,000 visitors each year at its locations St. Paul, Rochester and Mall of America, and reaches thousands more across the state through Smart Play Spots, Storyland exhibits and other programs. The Museum is consistently rated as one of the top children’s museums in the country by national media outlets such as Forbes and Parents and was named as a finalist for an Institute of Museum and Library Services Medal of Service, the nation’s highest honor conferred on museums and libraries. Online: MCM.org

About Insight Dynamo
Too often, research companies simply deliver data without clarity or meaning, which can lead to confusion and misinterpretation, and ultimately fails to solve a business problem. Our belief is that providing information is not enough—you need to be able to turn information into insights, and explain what those insights mean. And with 30 years of combined experience in this field, we are able to do just that. We founded InsightDynamo as a high-touch, full-service and flexible insights consulting firm that delivers custom programs, tailored to you—your industry, your culture, your one-of-a-kind challenges. Think of us as an extension of the companies we serve, with an overriding goal of using our expertise to provide actionable insights that will make a real and pronounced difference to you and your strategic goals. Online: insightdynamo.com