Interdependence: Relying on Others & Working Together 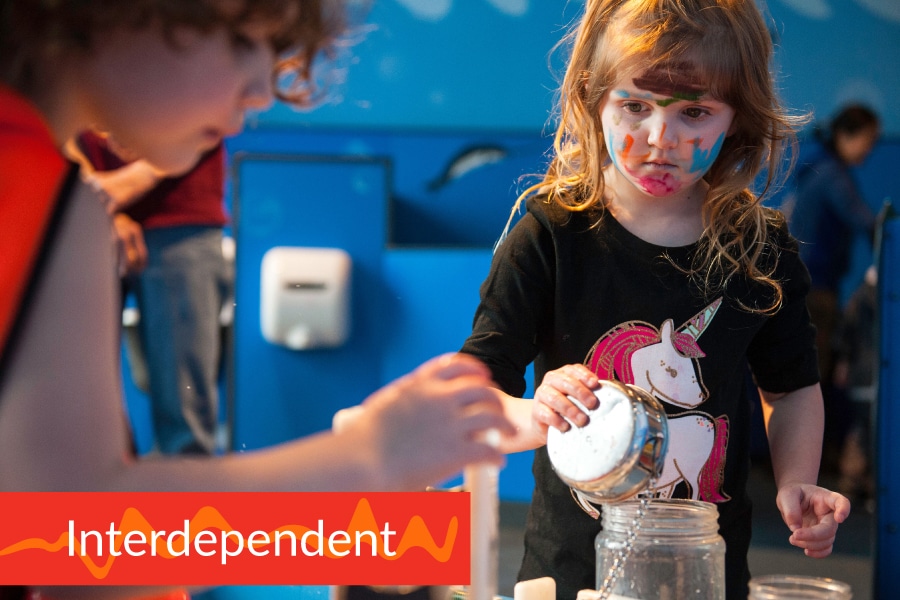 When your child is around other children, have you ever noticed them carefully watching what another may be doing and then doing something almost exactly the same just moments later? Perhaps they are watching someone put together an elaborate Lego sculpture and then they begin to build one. Or maybe they are noticing how meticulously someone is aligning blocks up to make a road and then they make their own road using the same method. This doesn’t make your child a copycat. This is actually a first step in learning how to be interdependent with those around them.

Now, while being independent is a strong desire for most and also an important part of living a positive, healthy, productive life as an adult, it is actually through interdependence that a person is able to expand on their strengths and have opportunity to make an even larger impact. To be interdependent means to be able to rely on each other to assume a shared responsibility or work toward a common goal. Think of it as joining forces. When Apollo 13 lost oxygen tanks and fuel cells, individual masterminds at NASA played off of each other’s knowledge, thoughts, creativity and ideas to craft a solution that brought the stranded astronauts back to Earth. It was their effective interdependence that ultimately led to success.

Interdependence is an important part of social interactions and happens to make its debut in play. When children play together and come up against a challenge, they don’t come into the situation believing that they are the only one who can figure out a solution. Instead they keep an open mind (I recently blogged about open-mindedness too if you want to learn more), get inspired by one another, and try lots of different ways to overcome the challenge…..together.

Collaboration:  Valuing the Contributions of Others

At Minnesota Children’s Museum, we have identified seven skills we believe children need to thrive, now and throughout their lives, one of which is collaboration– the ability to engage with others positively and productively. Interdependent is one of the Museum’s identified dimensions of collaboration. It is what helps people value the individual contributions of others as well as get inspired by what they see, hear and experience. In turn, a person’s own actions will often inspire others around them and the ability to expand on each other’s work is presented.

Encouraging Interdependence with Your Child

Model interdependence and collaboration around your children:  let them see you noticing and showing interest in something someone else is doing. Then engage with that person such as greeting them, paying a compliment and asking to join in. Reinforce these same basic social skills with you child as much as possible. Be sure to encourage your child to join a group of children they may not know. Help comfort and ease any anxieties by watching and listening what the group is doing and talking about it with your child before they join in.